Don’t try to excel at work. The philosophy of “SUSHIRO” 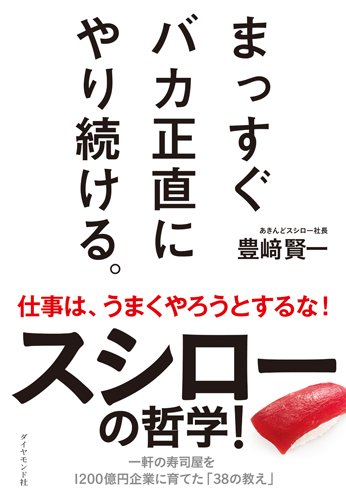 Sushiro’s obsessive attitude of customers over everything was what made an ordinary sushi restaurant into a 120 billion yen top industry company. With their motto as “satisfying customers with delicious sushi”, Sushiro has sought to deliver the best sushi for the price of a hundred yen. The company made continuous efforts, even sacrificing net profit at times. This book uncovers the “philosophy” of Sushiro as told by the ex-sushi chef CEO.

The story dates back to 30 years ago- when the author initially started working in a sushi restaurant called “Tai-sushi” in Abeno, Osaka. Not long after, his boss Mr. Yoshio Shimizu(Sushiro founder) decided on entering the kaiten-zushi (conveyor belt sushi) market. At that time conveyor-belt sushi bars had a reputation for being cheap but second-rate quality, and Sushiro aimed to go against this stereotype and produce sushi that was affordable and delicious. This resulted in Sushiro’s “cost rate of 50%”. It is common knowledge for chain restaurants to keep their cost rate in the thirties, as without this it is difficult to obtain profit. Sushiro put all of their efforts into providing fresh seafood, even compromising profit on the way. Excluding personnel costs, they shaved off unnecessary expenses, 1mm at a time. As a result of this arduous process, a business model that could maintain itself on 50% cost rate was born. This book has extracted “38 points of philosophy” from Sushiro’s history of 30 years, and captured the spirit of how a small restaurant had evolved into a top industry company.

This book introduces Sushiro’s past history, its mottos and company spirit, and how exactly it was able to rise to the in the competitive kaiten-zushi market. It is truly astounding to see the art of sushi making, a traditional Japanese craft, be put into an economic viewpoint. The ambitions from the original founder of Sushiro were relayed to current CEO Kenichi Toyosaki, who raised the company to what we see today. Craftsmen are especially recommended to read this book. One reader comments that while there are many books in the world with advice on how to gain profit and become successful, this one is truly one-of-a-kind. It wasn’t written by authors, consultants and others who need the book to sell out. It is a book filled with precious knowhow on how to create a top sushi chain restaurant from scratch.

Kenichi Toyosaki is the CEO of AKINDO SUSHIRO CO., LTD. Born 1965 in Tokushima prefecture. Upon graduating high school, enrolls in TSUJI culinary institute. Starts working in “Tai-sushi”, a sushi restaurant in Abeno, Osaka after graduating from the institute. Immediately after in 1984, founder Yoshio Shimizu enters the kaiten-zushi (conveyor belt sushi) market. Kenichi Toyosaki is appointed as CEO in 2009. He increases sales from 50 billion yen (2007) to approximately 120 billion yen (2013), to have Sushiro reign as the top company in the sushi industry.