Leave it to Women to Make a Hit Product 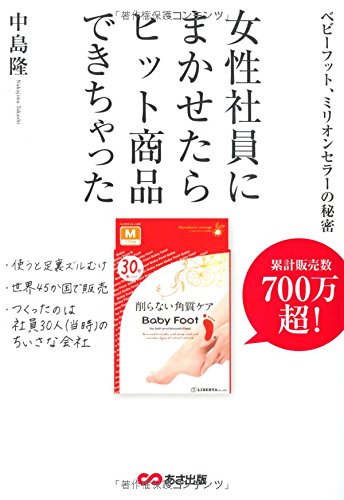 Baby Foot is a skin care product for feet that is incredibly popular in Japan and many other countries. The story of this revolutionary product is detailed in this 220-page book from well-established journalist Takashi Nakajima.

The book is divided into two sections. The first part covers the product and its inception in detail. The second part applies these lessons in terms of management abilities and the role of female employees.

The story of Baby Foot begins with a simple idea: the need to look after the conditions of one’s feet. From that notion came a revolutionary product. The first few chapters discuss the early days of the product’s development. A lot of detail is provided regarding the inspiration behind Baby Foot and the success of this unique idea.

Chapters five and six look at recent developments of the Baby Foot product, including the international success that it has achieved. These six chapters provide a comprehensive overview of the story behind a product that has found worldwide acclaim.

Part two hones in on three abilities that can be utilized to create hit products. The first chapter looks at the important role of female employees, and the skills that they bring to a company in connection to product development. The second chapter focuses more on communication, which is an essential skill in any business. The final chapter talks about the need for confidence and trust. Using Baby Foot as an example, the second part of the book applies such fundamentally important lessons to the wider world of business and product development.

Baby Foot is a highly regarded and trusted product that is on sale in 45 countries around the world. More than seven million units have been sold so far. What has contributed to this success? Where did the product come from? This book discusses the origins of Baby Foot in detail, and applies the lessons in a wider context.

A strong theme running throughout the book is the role of female employees in the workplace. The role of women in product development in Japan is given the emphasis it deserves by Nakajima, whose writing style and credentials in the world of business journalism are second to none.

Takashi Nakajima has more than 25 years experience as a journalist and reporter, and has been covering the Japanese economy for the Asahi Newspaper for decades. For several years, he has been reporting specifically on small-to-medium size enterprises, and the challenges unique to such businesses. He has several other publications under his belt in addition to his extensive journalism and reporting career.