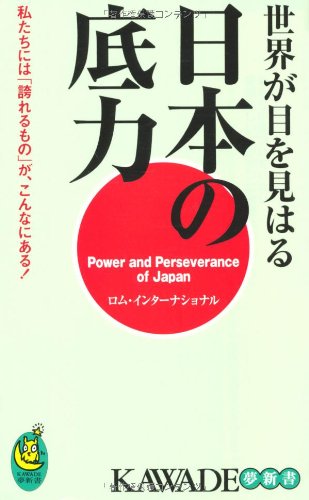 This book is aimed at helping Japanese readers recognize the aspects of Japan gaining high reputation from other parts of the world, and the aspects that are looked over usually as they are common in our daily lives.

Some of them may take the form of systems or technologies, for example；

Other traits may be sensed as the spirits such as hospitality or obedience to rules observed in chaotic situations following the Great East Japan Earthquake, spirits that have been developed through long history of Japan valuing harmony.

Details are available in chapters:

As a whole nation, how could Japanese people regain confidence that have weakened due to many year's economic downturn to move forward? Also, they might feel lagging behind emerging countries that increase their strength in world markets.

This book encourages Japanese readers by presenting praiseworthy aspects of Japan. Some are found in leading-edge technologies in construction and medicine, for example, and others are spirits nurtured through Japan's tradition of valuing harmonies with nature and among people. That must be Japan's unique and respectable trait.

Toward Tokyo Olympic in 2020, momentum gradually increases toward welcoming visitors from abroad with hospitality. To convey Japan's respectable aspects with confidence could be another form of hospitality.

ROM INTERNATIONAL is a group of planning and publishing books established in 1983. Taking advantage of its ability to collect a broad range of information and agility, published many good-selling books, especially on those in travels, business, overseas information.