I Decided To Save The World With Euglena 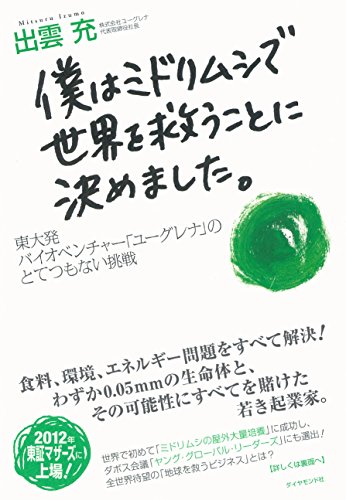 What is euglena? It is a microalgae which grows in fresh water and has both plant and animal characteristics, stores the energy by photosynthesis like plants and moves around like microorganisms. It can grow with sunlight, water and CO2, and contains 59 nutrients. It can be used for food, cosmetics, and bio jet fuel.

This book tells about the author’s life, purpose, dream and his process of entrepreneurship with euglena.

At the age of 18, Mitsuru Izumo traveled to Bangladesh for an internship with Grameen bank for a month. While there he witnessed poverty and starvation firsthand. This shocking reality gave him desire to save as many lives in the world as he could. He found a potential solution in “euglena” through his friend and later co-founder of the company, Kengo Suzuki.

After graduating from Tokyo University, he worked at Tokyo Mitsubishi bank but left after one year, because his desire to start a company that would commercialize euglena had grown so strong. He met another co-founder of the company, Takuyuki Fukumoto and the three of them found Euglena Co. in 2005.

Their venture company faced many problems; no other company or investor believed in euglena’s potential, lack of funding, cultivation issues with euglena on a large scale and more. However, within one year, Euglena achieved the world’s first mass-cultivation of euglena, but kept struggling to become a profitable company.

In 2008, a major trading company, Itochu Co., invested Euglena and everything started moving in the right direction. Euglena has been listed in TES Mothers since 2012. The possibilities of euglena has no limit.

The Author, Mitsuru Izumo, had a passion about euglena and believed in its potential to make the world better. He had a secure banking career but his passion led him to leave a comfortable career and found Euglena. Not everyone can make such a risky move, but his timing, decisions and meeting the right people helped him keep moving forward with his dream. “Everything has value”, he says of his experience. His motivation was never money. He is still thankful for the people who helped him in his achievement, which may be one factor of his success. His hard work has been recognized and he has received numerous awards. Readers will enjoy and learn his overcome and success story.

Mitsuru Izumo is a CEO of Euglena Co., Ltd. Born in 1980 in Kure, Hiroshima and grew up in Tokyo. Visited Bangladesh and was shocked by the starvation, which led him to start business later. Graduated from Tokyo University with BS in Agricultural and Resource Economics. Entered in Tokyo Mitsubishi Bank in 2002. Established Euglena Co., Ltd. with two friends and became CEO in 2005. Led his company to achieve the world’s first mass outdoor cultivation of euglena in 2005. Selected to Young Global Leaders by World Economic Forum in 2012. Has received many awards, including Stanford Univ. Japan-US Innovation Awards Emerging Leader in 2013, Harvard Business School Club of Japan Entrepreneur of the Year in 2015. He continues to develop new business in cosmetics, food, and fuel.