How TANITA Became Number One 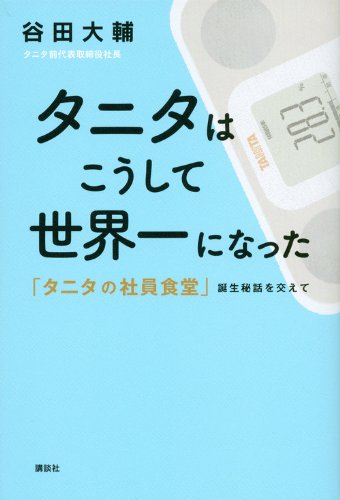 TANITA, known for its world first consumer body fat scale, started preparing healthier diet-conscious menus for their employees in the staff canteen over ten years ago, in 1999. The menus have now garnered attention as the best seller series. The staff canteen menus of TANITA, manufacturer of body fat scales has sold a total of over five million copies. Its successive "Marunouchi TANITA canteen" also made a great hit as well.

In the 1980s, when author Tanida, previous CEO as well as the founder of the staff canteen had risen to take command of TANITA, the company was in a life or death crisis. With sluggish results and being in the red, TANITA was in a situation where employee layoff had become necessary for survival. In the midst of this crisis, the author set a goal of having "Number one bathroom scale/health meter sales in the world"- an aim surprisingly high for a SME with only several hundred employees. In this book, the author will reflect on his life as well as the company history, follow TANITA's footsteps to the present day, and disclose their pursuit of good health and management principle that led TANITA to become a leading company in the world.

TANITA business is marked as marketing coupled with astounding corporate philosophy. Their relentless pursuit for good health led to TANITA's position as number one for scales/health meter sales, and the creation of the famous TANITA staff canteen, a side product as well the gem of their philosophy and spirit.

From their original business of "selling bathroom scales" to their newer business in promoting and providing "healthy lives", TANITA has continued to alter its management principle while keeping their fundamental belief in the pursuit of good health. It is said that for companies to succeed they must continue to change and improve, and TANITA has naturally been doing so while passing the baton between its generations of successors. However, their founding principle- to aim for a "world with neither obesity nor starvation" remains unchanged, and this depth proves that TANITA is not just an example of a temporary success story.