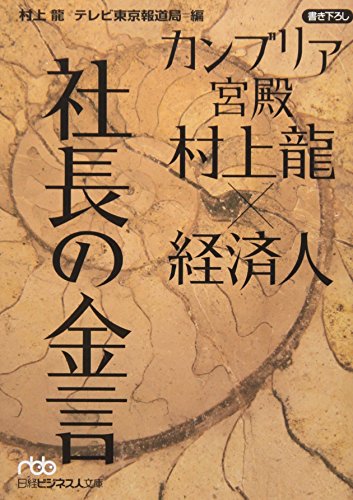 The book is a collection of the golden words shared by as many as 68 presidents of companies across a broad range of business fields, words that are keys to success in company operation and sorted into 6 categories : responsibilities of top executives, capacity building, ability to foresee, decision in adversities, strategy for future and management with belief.

The golden words include, for example, "Fair trade should be prioritized over profitability", "Key for a company to become a top level one lies in discipline or making the work environment neat and tidy", "Interest will make invisible visible" or "Setting a goal on achieving profit-driven ambition will victimize workers". The words were all identified through interviews in a TV talk show series "Cambrian Palace" and then edited into a book as titled.

Allocated to a president are 4 pages. The first page consists of his profile picture and the words provided by him and the remaining 3 pages cover content of the interview before and after the words were identified, followed by a summarized career history of the president. This compactness may make readers feel unsatisfied. In fact, the book is positioned by the interviewer as a collection of summaries of the TV live show. Yet, the compactness is designed to make it easier for readers to understand the president's thoughts more clearly. Further, all the more because the words are convincing, one will be inspired to think the background : how hard and how long they have struggled before developing their own philosophies.

As expressed by its advertising slogan that words of the other company's president are convincing, the words will inspire readers, especially business owners, and help them gain hints toward approaches to tasks from multiple perspectives. One point in common among the presidents is that, despite hard struggles, they seem to have been excited rather than seeing difficulties as troubles. Such a positive state of mind seems to come from their genuine involvement in works based upon their own philosophies. Interestingly, the interviewer expects readers to despair by experiencing the sense of struggles as if they have been their own to realize it's impossible for them unlike the presidents. He believes that the despair will help them realize how grateful it is to encounter objectives worth addressing over many years. Thus, this book could be recommended to those who want to be inspired with unconventional way of overcoming challenges.

Ryu Murakami is a Japanese novel writer born in 1952. In 1976, debuted with the 75th Akutagawa prize-awarded "Blue almost transparent". In 2003, published a best selling book "Job placement agency for 13 years old pupils" providing information across 514 kinds of jobs in order to help young people learn that so many options are available in terms of job opportunities. Since the collapse of bubble economy, has placed the most focus on finance-related themes.