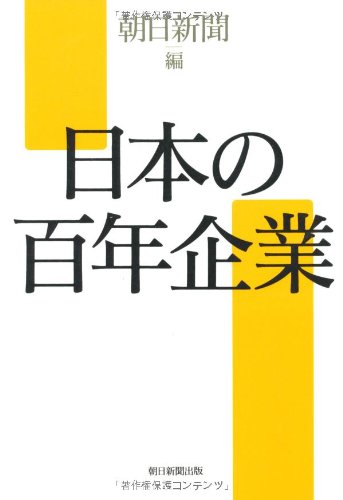 This book is a corpus series of stories about 111 companies with more than a 100 history chronicled by a newspaper, Asahi Shimbun. These companies have a credo of building trustworthiness and kept businesses without being caught up in trends, yet stood against many crises. Their histories would tell you the series of challenges they overcame. Many of them are small businesses, rooted in and loved by their communities.

There are a couple of common factors among these long-established companies. First, they have not been afraid of change and made changes according to their circumstances. They have developed superior craftsmanship and skills but at the same time they have innovated them in new directions. One company’s saying is “tradition means continuum of innovations”. Second, they have been building their customer base with innovation to expand their market with new strategies and technologies. Third, they have built a long-standing trusting relationship with their customers. They don’t seek their gain but that of their customer’s by putting customers’ needs and benefits first.

Each company has a great story about creating a thriving business by developing unique craftsmanship and human resources, using tribal knowledge.

It is amazing that there are so many long-established centennial companies in Japan. The readers can learn a lot from the story of these companies. They survived the Great Depression, World War II, the 1972 oil embargo, economic bubbles and the global financial crisis.

However, many of them are facing new challenges like the current global financial crisis, a lack of successors, financial hardships and more. These companies have a long business history but, it does not mean they will have a long stable future. How they operate their companies over the next 100 years could depend on how they use their past experience and their continual innovations.

It would be great if the spotlights on these long-established yet small companies outlined in this book could give a positive outlook and new hope for both the companies and the readers.

The Asahi Shimbun Company is a leading Japanese newspaper publisher and a conglomerate with advertise, broadcast and print media. Founded in 1879, in Osaka. They publish a daily newspaper, magazines, and other publications. The Asahi Shimbun is one of leading Japanese newspapers and the company’s main publication. They have 317 bureaus throughout the world and employ 4,640. Started a news site, asahi.com in 1995, a paid news site, digital.asahi.com in 2011. They are known for breaking news in Japan. They offer foreign language service in English, Chinese and Korean since 2012. With the Huffington Media Group they established “The Huffington Post Japan” in 2013.